Perris
Eau Claire, Wisconsin, United States
I am a high school history teacher, volleyball, basketball, and softball coach, sculptor, and wargamer. I have a wife and two children, a girl and a boy. I enjoy painting and collecting miniatures, reading, computer gaming, playing volleyball, and travelling.

Well, I will start this blog episode with a hearty thanks to Jim aka ColCampbell from TMP! Thanks to his advice on how blog the pictures and the descriptions actually make sense! now I will have to see if I can go back and re-do the first installment so I don't look like a complete idiot. Much thanks Jim! Hope you like the new design and pics!
I got some more Byzantine troops out into the glorious Wisconsin summer sun. Temps in the mid 70's and low humidity created a beautiful studio to work in.
This first picture is the center of the army as it deployed into the sands of the sand box to face any foes that should dare approach such a mighty host. The infanty unit in the far right of the picture did not turn out in the picture that I took. It was blurry and I will get more of it later. Both of these infantry units are Gripping Beast figures. 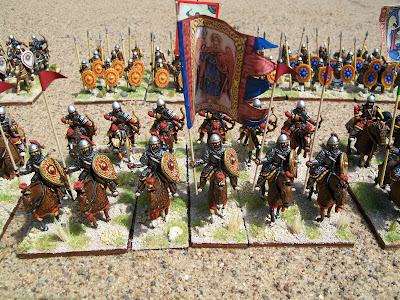 This Tagmatic Heavy Kavallarioi unit is my own special creation. The figures are my own sculpts and my first try at sculpting 25mm figures. I mounted them on Hinchliffe horses because I liked the look of the old Hinchliffe horses. I am going to paint a gold band around the archers helmets to get a better match to the front rank figures. The front rankers are based on the Kataphraktos painting of Angus McBride in the original Osprey book on the Byzantine army. that book inspired my love for the Byzantine army and the Crusades period in general and I had to do the figure from the book in miniature. This unit is my tribute to the late Mr. McBride. 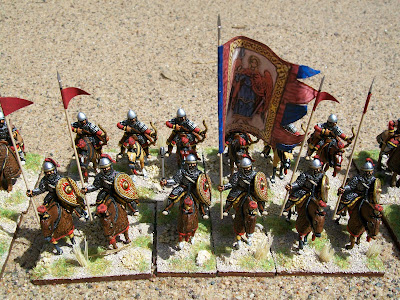 This Tagmatic unit is a mix of front-rank Old Glory converted figures and a rear-rank of Gripping Beast hippo-toxotai (Horse archers). The archers would be used to harrass the enemy and shower them with arrows as the lancers charged and re-formed to charge again if the initiall assault failed to achieve the desired effect. One of my few "green" themed units. All of my tagmatic units are mounted on armored horses to differentiate them from thematic heavy cavalry units. 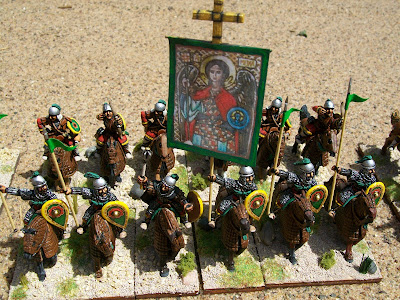 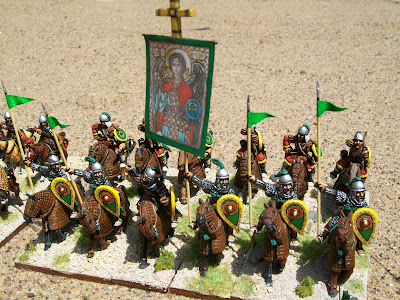 Well, this Tagmatic unit was my first try at converting troops to get "the look" that I wanted to capture based on the Osprey book on the Byzantines that got me hooked on them years ago. I had some old Irregular Normans laying around and decided to convert them into Byzantine Tagmatic Kavallarioi. Here is the result. I added some Gripping Beast Russian druzhina cavalry converted to archers and the result was better than I expected. Officer and Standard bearer are converted Old Glory figures. This was the first Byzantine unit that I did. I tried to match the standard to the shield design whenever possible. Horses are Old Glory from their Kataphraktoi bag with some Gripping Beast horses in the rear ranks. All in all it remains near and dear to me. 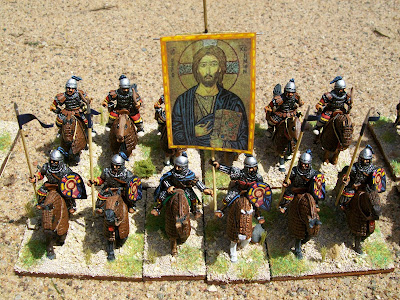 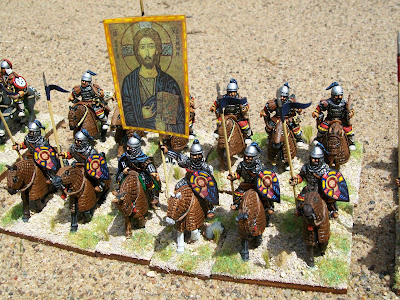 Thematic Kavallarioi from the reserve line of my array. These are Crusader miniatures and very fine figures they are! Shield designs by Little Big Men Studios. They are FANTASTIC!!! My army would be pretty plain without Stephen Hales designs! Highly recommended. I tried painting/drawing some banners copying his and it was not worth the effort. His were way better. 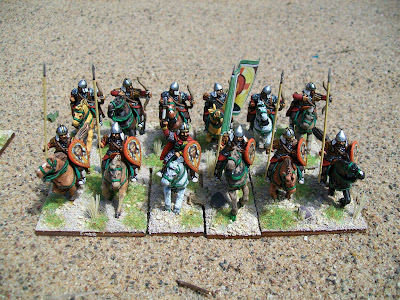 Skutatioi of the reserve line. They have quilted armor. Gripping Beast figures with an Old Glory officer. The other infantry unit picture did not turn out so I will do an "infantry" theme at a later date. Banner from the internet. Love to seach for Icons! 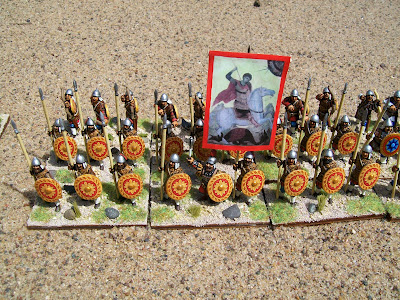 A reserve line unit of thematic kavallarioi from Gripping Beast with an Old Glory officer. I am not a huge fan of the GB horses, but they paint up ok. 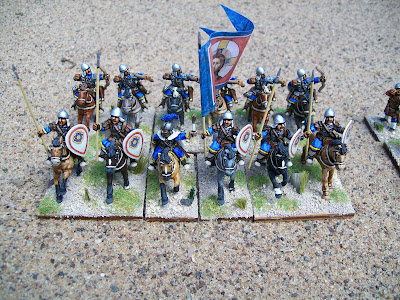 This is my Latinikon unit for the Comnenan Period Army. It is mostly Old Glory Norman figures with a uniform appearance given by matching shields and lance pennons. 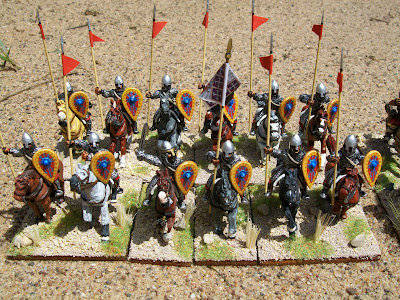 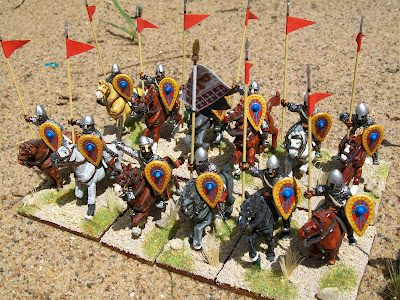 This regiment is a Gripping Beast Heavy Kavallarioi unit with an Old Glory officer leading them. I do have a lot of Old Glory officers don't I? Banner is courtesy of Javier! Couldn't match the shield to the banner here though! Maybe one day I'll try painting archangels on shields. 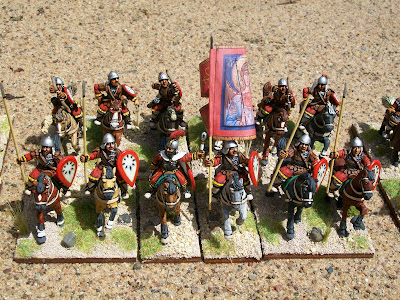 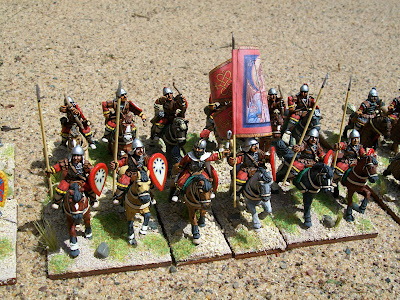 This is a kavallarioi unit from one of the Themes. It is a mix of Crusader and Gripping Beast (GB) figures. I think they mix well and give a lot of variety. I used infantry teardrop shields from GB because I liked the design and wanted more variety in my army. I will have 8 Kavallarioi regiments when all is said and done. I got carried away. 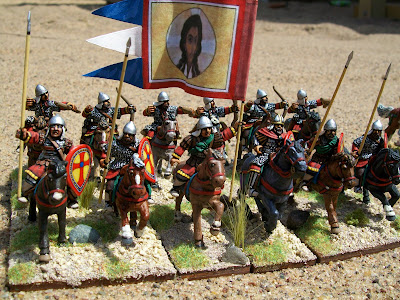 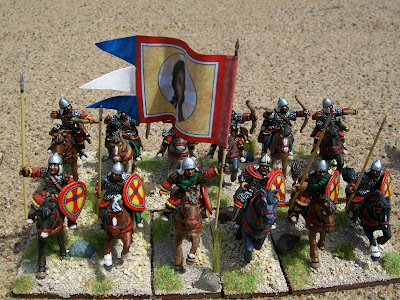 Gripping Beast Light Cavalry for my Vardariot unit. I really like the Gripping Beast figures. They have a lot of character and paint up easily. This unit can be used as a light skirmishing unit or can be classed as heavier depending on your needs. 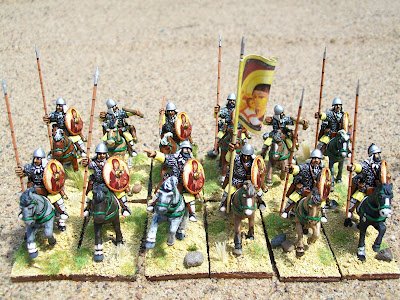 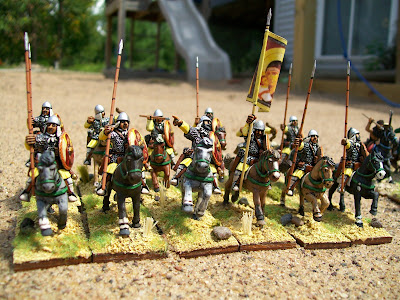 Old Glory Pechenegs for my Skythikon unit. Some 1st Corps figures thrown in for variety! The officers are from the Old Glory Byzantine Command Bag. I will repaint the banner soon. Not my best effort at painting... 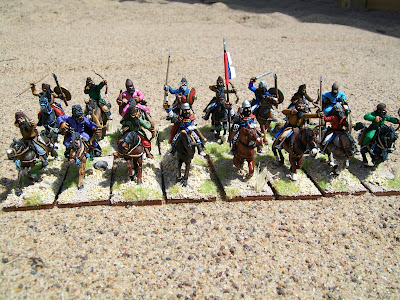 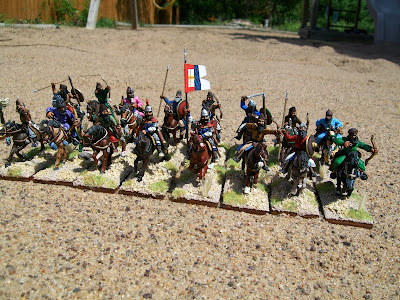 I started out to build Byzantine, Saracen (Fatamid and/or Turkish), and Frankish Crusader armies to game a Crusade era campaign, and I ended up creating a monster. I have enough troops to field Byzantine armies ranging from the 9th Century (Thematic Period) through the 13th Century including the Nikephorian period and Comnenan Dynasty period. So now I will have to have a Byzantine civil war I guess. I will add pictures on my Turks/Saracens and Crusaders at a later date. Also I still have a few more Byzantine units in development including some of the dreaded Kataphraktoi, later period infantry and cavalry, and skirmishers.
To my great horror I discovered a new mod of Medieval II:Total War that has some really cool Byzantine, Georgian, and Armenian units. I have already begun to sculpt them...